Evening people, Bif here. Yesterday I managed to get to Salute 2017, the yearly hobby con put on by the South London Warlords. This is no little get together, I’m lead to believe this is the largest hobby convention in the country. This was my second year going and I enjoyed both trips. It’s held at Excel in London’s scenic (read – Shitty) Docklands (told you it was big…) and its basically a massive warehouse full of hobby goodness; new games being promoted, vendors selling stuff for every game you’ve ever heard off (and in my case, loads I’d never hear of but want to get to know…), hobby essentials (Dice that say “bollocks” instead of one… yes, I bought six of them…) and bits: Lovely, lovely bits. I am a sucker for small bits of resin / plastic with which to adorn my models. Head swaps, weapon swaps, general accoutrements and stuff to improve your scenery game.

Anyway, I thought I’d show you a few of my purchases: 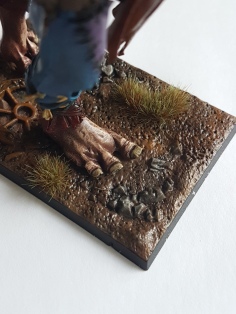 Not the giant (Had that for years, only just painted it, thanks for the inspiration Dwalin), the tufts of grass. I’ve always used static grass for my bases but wanted to try tufts, they’re great! Super easy to use; peel and stick, and the look the part for sure. I bought the Mixed Green 6mm set from Great Escape Games .

This next piece is from Zinge Industries. Its going to be a Rapier with Quad Launcher for my 30k force. I put it together in a few minutes and the sculpt is excellent, very little to clear up and it looks spectacular. Soon to be painted and slotted into the First Legion’s wall of death force. 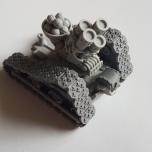 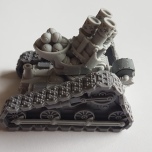 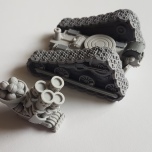 Check decals for Ork vehicles, belts for models and gun harnesses, chain and ammo belts. I managed to get this little lot for an amazing deal,proof its always worth checking out the stalls at conventions for sale items… 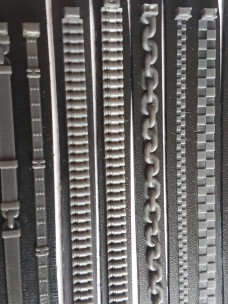 Stay tuned for these and other goodies I picked up getting used and painted in future posts.