From the nimble fingers and less nimble mind of Dwalin Weissbeerson Espressoshield III… a bunch of stuff written to amuse and, most likely, bemuse.

Welcome one and welcome all to a bumper edition of Star Trekkin’… my attempt to watch every Star Trek Episode and Movie (excluding enterprise… which doesn’t count. Yes, I’m sure I’ll end up eating these words at some point) and lovingly explore my reactions to them.

If you’ve been keeping up you’ll know I watched a load of episodes and have been frantically trying to spend my free time writing them up; this was a stupid thing to do as it’s meant I am an arid, dry, Trek empty desert of a man.

Friends, this post is an end to that. I present to you the final four episodes of what I shall dub the ‘that time Dwalin Weissbeerson Espressoshield III seriously fucked up and went without watching star trek for a long period despite challenging himself to watch all the episodes’ cycle.

Either way, here we are, and I am LUDICROUSLY EXCITED. This four episodes are the best I’ve seen of the series so far.

SO without further ado…..

Let’s figure out what it means to be Human. Lets figure out how we age, howour minds change AND YET how despite these changes there is an inevitability within our osyche that plays us off against the unknown.

Kirk and co. land on a planet. On that planet we have some alien children; but they’re basically Human Children. Human Children from the 60’s. Yeah, this shouldnt be a difficult one to make the leap to see the allegory.

The general premise for this episode, and the planet, is…

This episode is fucking awesome. Seriously.

It’s difficult for me to tell you why it is so good without absolutely ruining it with a shit load of spoilers; I’ll try though.

Emotion is something this episode throws about in spades; we watch the intensity of youth flourish through love, desire, destruction, jealousy and… super fucking importantly… fear.

Fear is an emotion that powers this episode and leads to a realisation that perhaps our infantile reactions to shy away, or to reach out to quash what makes us feel alienated from the world, is something we DO NOT grow from and is the root cause of our oppressive and destructive nature. We are naught but children. But not the good shit kids have (which gets discussed a lot in this episode), just the bad.

apart from the mega cheese name of ‘grups’ the children call the adults. Seriously, did

the writers have to shit all over an otherwise damned flawless episode? AARRRGGH!

… and this kid is annoying as fuck

seriously… just look at him. Says it all.

109 TOS The Conscience of the King

Wait a darn tooting minute…. this episode is also pretty much fucking flawless!!!!!

TOS seems to be hitting a roll here. A roll of unbelievably good, incredibly intelligent, fast paced and interesting episodes.

FUCK THIS IS SUBLIME!

This is an episode that seethes brilliance and, much like Miri, has a really psychological focus to what’s going on.

Again a general synopsis…. Evil dictator dude that went mad and butchered a shit load of people in the name of the conservation of resources, though utilised a eugenically minded approach in doing this (fuck) re-appears on the scene not as a power crazed dictator but as the leader of a troupe of actors.

JUST THE PREMISE MAKES ME WANT TO THROW AROUND SO MUCH FAUX INTELLECTUAL BULLSHIT THAT I FEEL LIKE I MIGHT EXPLODE ALL OVER THE PLACE!

But I’m not going to… because it will clog this post up way to much, and there’s more narrative to recount.

So we have a high adrenaline episode with Kirk evading death, trying desperately to prove Mr Crazy is Mr Crazy… oh and seducing Mr Crazy’s daughter 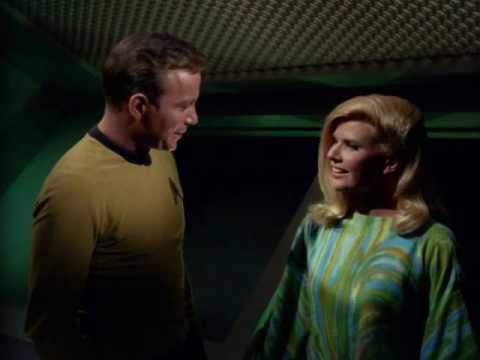 So yeah… there is a super cool bit of speech from Mr Crazy; his name is actually Anton Karidian, but Mr Crazy will continue to do. In this bit of speech we get a glimpse into this idea that, despite him having been a mass-murdering psychopath, and now being an actor, he is both the same person and an incredibly different one. The inference doesn’t just seem to be a simple ‘I’m not that killer guy no-more’ but more ‘I am the actor guy that was the killer guy because it was his part to play’ . Seriously. This is some super dark shit when thought of like this as it has some ramifications for all of our daily lives…

but hey, let’s forget that and move on to…

Oh, ok. This ones a bit weak. Spock gets a lesson in why his logic doesn’t always come to the right answer as feeling beings struggle with acting in a purely logical way.

Story wise, seven folks from the enterprise crash land on a planet in a shuttle craft. There’re some big hostile beasties and Spock takes command to try and keep the beasties at bay and get off the planet. It doesn’t go according to plan.

It’s a bit stock. It’s a bit slow… and to be honest the logic in it doesn’t strike me as being particularly logical.

It’s cool to see a bit of a development of Spock, he’s not had the hugest amount of depth thrown his way thus far. It’s also nice to see him begin to flourish as a thinking individual accept a need for a full acceptance and usage of his emotion as being an aspect of his consciousness.

But yeah… not a stand-out

This guy was a bit annoying as well; though he had a nice reaction to other crew member’s deaths

…. and we’re back on the awesome track with this mighty fine episode.

Kirk is blamed for the murder of a crew member who he used to be super duper best friends with but they had a falling out and now there’s a perceived rivalry…. dum dum DUMMMMMMM.

Basically in this episode we get to see Kirk being a moralistic BOSS calling out for a trial leading to a potential court martial DESPITE all of the COMPUTERISED information stating unequivocally he done did a murder.

It’s epic and I massively enjoyed it.

Not least for the discussion it has on our over reliance on technology. I won’t ruin the episode… which to be fair the outcome of which is quite predictable (though no

less awesome because of this) … but I can discuss this through a nice little point the show makes with Kirk’s lawyer. This dude

can you guess the point? Yeah. It’s books.

This dude LOVES BOOKS and doesn’t want to use a computer thingy dooby to read. He wants the physical- the manifestation of art and thought in a realm beyond that of a purely intellectual. A cry to our form to embrace its physical existence in such a way as to fortify and explore meaning in a sense beyond the realm of adulterated text. Provenance. Historicity. These are things which fortify his understanding. The ability to hold, touch, smell- these are elements of our conciousness and can lead to understandings of things, and interpretations, purely electrified knowing cannot.

I love this. I love this so much and I think we should make this episode compulsory viewing for all inhabitants of this little planet right now before we lose something incredibly special.

…. well there we have it folks.

I CAN FINALLY GET WATCHING AGAIN!!!!

Until next time folks….